How to get out of the ever-faster running train. That was one of the questions raised in a spiral round during the last method lab in Ljubljana. The spiral method facilitates a collective brainstorm. One by one, the circle of people iteratively try to express what is important to them in that moment. Starting with basic needs, such as regular breaks during the workshops or being able to spend time in the sun, answers soon developed into ‘I don’t know I can be fully present in this session, I have so much to do’, ‘I have so much stress at work’, ‘I need to complete five tasks at the same time’, etc.

One participant associated these remarks to an ever-faster running train. The person described it as a high-speed train that never stops which makes it impossible to get off. Some people in the round described the feeling of being stuck on this train and found themselves completely at a loss how to get off. Others referred to people in their surroundings, whom they were trying to take off the train. Not a single person in the circle felt as though they had managed to jump off the train successfully, and those that managed momentarily, watched in vain how they’re friends were still on board.

How then to get out of the ever-faster running train collectively. How can we not just save ourselves but take people around with us. Who knows, maybe if we manage to get enough people out of the train we can sabotage the rails to slow down the train. Or, even better, we can bring it to a halt. We could stand together as a resilient revolt. To me, that captures the goal of this project: to be able to revolt resiliently, to be able to collectively stop the train that represents capitalism, racism, ableism, the patriarchy and every other system of oppression.

So then, we need resilient communities. Collective resilience is about finding a positive, joyful, healing way to face and bring about change together. Whereas individuals are turning to spiritual practices such as meditation or yoga, the collective finds moments of standstill through building community. Whether financial or other kinds of solidarity, a sense of purpose and belonging, a network of care and support, a feeling of safety, group cuddles or other ways, all have a regenerative function that enables our activism. As adrienne maree brown says: ‘the strength of our movements is the strength of our relationships.’ By building networks, connections and friendships, resilient revolt started a transformative process to collectively get out of the train. 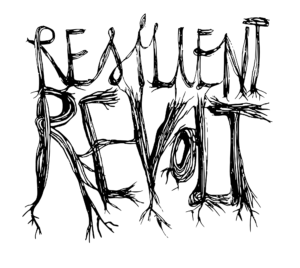